PROSPECT in a Nutshell

PROSPECT, the Precision Reactor Oscillation and SPECTrum Experiment, is a short-baseline reactor antineutrino experiment designed to conclusively address the reactor flux and spectrum anomalies, search for sterile neutrinos, and make the most precise measurement of the antineutrino spectrum from a highly-enriched reactor core. PROSPECT will consist of segmented liquid scintillator detectors deployed at short distances from the High Flux Isotope Reactor (HFIR) at Oak Ridge National Laboratory (ORNL) in Tennessee.  The 85 MW HFIR reactor is running 41% of the time, and burns highly-enriched uranium fuel, meaning that >99% of neutrinos emitted by the core derive from 235U fissions.

The detectors consist of an optically segmented antineutrino target of 6Li-doped liquid scintillator surrounded by external passive shielding. Light produced in antineutrino interactions is efficiently propagated using highly specular reflecting segment walls, and collected at each segment end with a photomultiplier tube. Phase I of the experiment consists of a 4-ton antineutrino detector (AD-I) that can be moved between three positions to provide baseline coverage of 7-12 meters from the reactor core and allow excellent sensitivity to neutrino oscillation with meter-scale wavelengths. Phase II will add a 10-ton active mass antineutrino detector (AD-II) at 16-20 meters from the reactor core for additional baseline coverage and oscillation sensitivity. Both AD-I and AD-II detectors for Phase I and II can be installed and operated in parallel given sufficient resources.

Neutrinos from a Nuclear Reactor 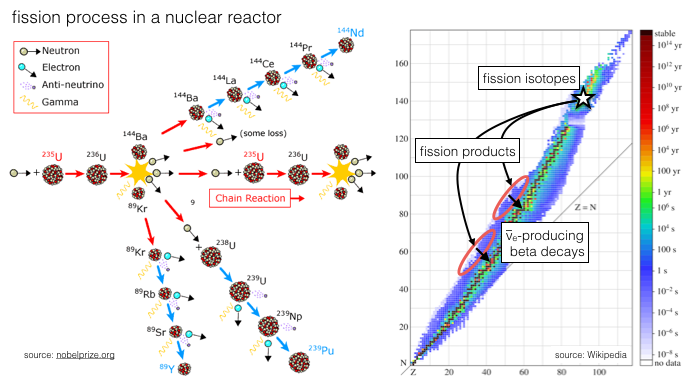 During each energy-releasing nuclear fission in a nuclear reactor core, neutron-rich fission products are produced.  These highly unstable products undergo a series of nuclear decays until they finally transition into a stable, long-lived isotope.   During each of these decays, one electron (called a ‘beta’) and one electron antineutrino are produced. Reactors are a pure source of electron antineutrinos. A gigawatt (GW) reactor produces on average more than one hundred-billion-billion (1020) fissions per second and a corresponding number of antineutrinos. Each of the most-common fission isotopes, 235U, 238U, 239Pu, and 241Pu, fission into different yet overlapping product distributions, meaning that the antineutrino spectrum from each fission isotope is similar, yet distinct, from the others.

Modeling Antineutrino Production in a Reactor

Since the early 1950’s, nuclear physicists have attempted to produce accurate predictions of the antineutrino flux emitted by nuclear reactors.  These predictions are vitally important for a variety of fields from nuclear applications to neutrino physics. The most commonly used method for predicting reactor antineutrino fluxes is called ‘beta spectrum conversion.’ In this process, the energy spectrum of betas produced by each of the dominant fission isotopes, an aggregation of thousands of individual beta spectra, is directly measured (left figure). This aggregate spectrum is then progressively fit with individual representative beta spectra (middle figure). The fitted beta spectra are then kinematically converted into antineutrino spectra. This converted spectrum, combined with the cross-section of the most commonly-utilized detection method, inverse beta decay, gives a detected neutrino spectrum (right figure). State-of-the-art beta spectrum conversions estimate a~2% uncertainty on the total predicted reactor antineutrino fluxes.

What Is The ‘Reactor Flux Anomaly’?

Reactor antineutrino experiments have also determined the flux of antineutrinos from reactors via direct measurements at different distances. As an example, the Daya Bay Experiment has measured electron antineutrino fluxes with detectors at far and near distances (~380m to 2km) and found a deficit in the far relative to the near (left figure). This can be interpreted in the framework of neutrino oscillation as a result of neutrino flavor transition. In addition, detectors at different distances from the reactor core measure an overall flux deficit with respect to the beta-spectrum-based predictions. This deficit is not unique to Daya Bay: on the contrary, most reactor experiments conducted over the past three decades at different baselines have measured such a deficit (right figure), with the global average of all measurements differing from the prediction by 3σ standard deviations (right figure). This is know as the ‘reactor flux anomaly.’ Similar deficits are seen in flux measurements of intense neutrino sources. 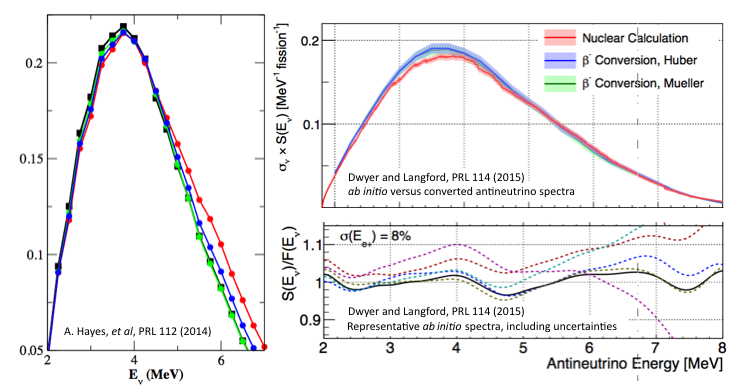 To address the reactor flux anomaly, it has been suggested that  the beta spectrum-based predictions and their estimated uncertainties are incomplete. The type of nuclear decays (forbidden vs. allowed) can lead to significant variations in the antineutrino flux and spectrum. The left figure shows antineutrino spectra with different assumptions for the fitted beta spectra. This has led some nuclear theorists to suggest that beta-spectrum-based antineutrino flux prediction uncertainties are about 5%, rather than 2%.

The possible limitations of the conversion method have motivated physicists to produce reactor antineutrino flux predictions directly from measured fission yields and beta decay schemes in nuclear database tables (right figure). This method, an ab-initio approach, produces fluxes that differ 0-10% with respect to conversion-based predictions, depending on the nuclear database used (upper right figure). 1σ systematic variations from this model’s input parameters lead to spectra shown in the lower right figure. This demonstrates that uncertainties in database parameters limit individual ab-initio flux predictions to ~5%. Even with improved total absorption (TAS) measurements of prominent beta branches included in these databases, the large number of contributing branches and highly uncertain fission yields make it unlikely that total ab-initio flux prediction uncertainties will be able to conclusively address the reactor flux anomaly. Nonetheless, the ab-initio approach may illuminate important isotopes that contribute to the observed discrepancy between measured and predicted antineutrino spectra, as discussed in the ‘reactor spectrum anomaly’ section.

The observed deficit in the measured antineutrino flux could be the result of the existence of an eV-scale sterile neutrino. Sterile neutrinos do not interact through the weak interaction but are accessible through neutrino oscillation. In this case, reactor electron antineutrinos can transition to sterile neutrino states over meter-scale distances. For distances larger than the oscillation length, reactor neutrino experiments would witness a net deficit in the total detected antineutrino flux. In this model, the shaded region in the left figure show the allowed parameter space described by the mass splitting and the mixing angle. Moreover, the same sterile neutrino parameters suggested by the reactor anomaly are also capable of producing anomalous experimental signatures witnessed in some short-baseline radioactive source neutrino (left figure) and neutrino beam (right figure) experiments.

Why Should We Probe Sterile Neutrinos At Reactors? 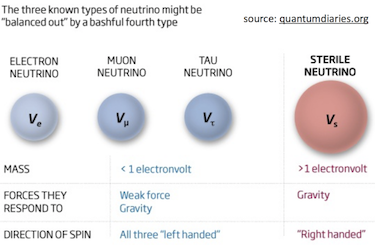 A discovery of sterile neutrinos would be the first-ever direct detection of a new particle beyond the Standard Model of Particle Physics and require a fundamental extension to explain this new state of matter. Observation of sterile neutrinos has significant implications for future efforts in particle and nuclear physics as well as cosmology:

Even if active-sterile neutrino mixing is very small, this must be verified at the percent level for ~eV masses to unambiguously achieve the physics goals of these next-generation neutrino physics experiments. Direct measurements of the L/E oscillation as proposed by PROSPECT are required to achieve this level of precision. Absolute flux measurements alone are insufficient to demonstrate oscillations as a signature of sterile neutrinos.

To provide a conclusive test of the sterile neutrino hypothesis a measurement of oscillation as a function of L/E is required. Therefore, PROSPECT will make a relative measurement of the antineutrino spectrum between individual detector segments allowing us to determine the characteristic distance and energy dependence of neutrino oscillation. With a baseline range of approximately 7-12m (Phase I) and 7-20m (Phase II), PROSPECT has the opportunity to probe eV-scale sterile neutrino oscillations in the allowed regions suggested by the reactor and other anomalies. With 1 year of Phase I data, PROSPECT will probe the best-fit parameters at 4σ and the favored parameter space in 3 years at 3σ. With an additional 3 years of Phase II running, PROSPECT will probe the majority of allowed parameter space at the 5σ level yielding constraints down to the 1° level in the sterile mixing angle θ14.

Measurements of the reactor antineutrino spectrum from the recent θ13 experiments Daya Bay, Double Chooz, and RENO have uncovered an intriguing anomaly: an excess of events in the form of a spectral distortion or ‘bump’ detected in the 4-6 MeV reconstructed energy range with respect to predictions. Since the existence of sterile neutrinos would be unlikely to cause such an effect, the observation of this spectral anomaly is another suggestion of discrepancies in models of antineutrino production in reactors. Despite their systematically different approaches, the conversion prediction and ab-initio predictions utilizing all available new ‘total absorption’ beta branch measurements, exhibit the same spectral disagreement with data. Additional data from precise reactor experiments are needed to resolve this open issue.

Correct prediction of the absolute spectral shape is of importance to medium-baseline reactor experiments like JUNO, where similar or other sub-dominant inaccuracies in spectral predictions may complicate the differentiation between the normal and inverted neutrino mass hierarchies. The nuclear applications community has also taken an interest in this discrepancy, examining whether it has a common origin with a long-standing observation of excess heat released by nuclear reactors shortly after they are shutdown.

Solving the Spectrum Anomaly with PROSPECT

PROSPECT will make the first precision measurement of the reactor antineutrino spectrum from a highly enriched uranium reactor core. The highly-enriched, 235U-only HFIR core provides a static spectrum that varies little throughout a fuel cycle (left figure) and can be compared to reference measurement from Daya Bay and other experiments at commercial nuclear power plants. With comparable statistics and higher energy resolution than Daya Bay, PROSPECT will be in an excellent position to investigate the origin of this spectral feature.

By measuring only 235U neutrinos at HFIR, PROSPECT provides new handles for separately evaluating the predictions’ constituent parts. The spectrum measured in PROSPECT will be particularly illuminating: an enlarged ‘bump’ would indicate problems specific to 235U predictions, while no ‘bump’ would indicate that another fission isotope is to blame. PROSPECT can also probe deviations from prediction in other portions of the 235U-only spectrum. Comparing LEU and HEU core spectra from PROSPECT and Daya Bay (right figure) can help illuminate problems with ab-initio beta branch calculations and motivate a well-informed program of targeted ‘total absorption’ measurements to address these branches. Any model improvements arising from these new constraints would directly benefit future reactor-based neutrino measurements, as well as many consumers of existing nuclear databases.

Requirements for PROSPECT Phase I

The goals of the PROSPECT Phase I experiment are twofold: >4σ exclusion of sterile neutrino best fit within 1 year of data taking and to make a precision measurement of the 235U antineutrino energy spectrum. Of course, the PROSPECT AD-I must be carefully designed to met the stringent space constraints and regulations at a research reactor facility. Moreover, there are specific capabilities the detector must provide to make precision observations of the flux and spectrum possible: 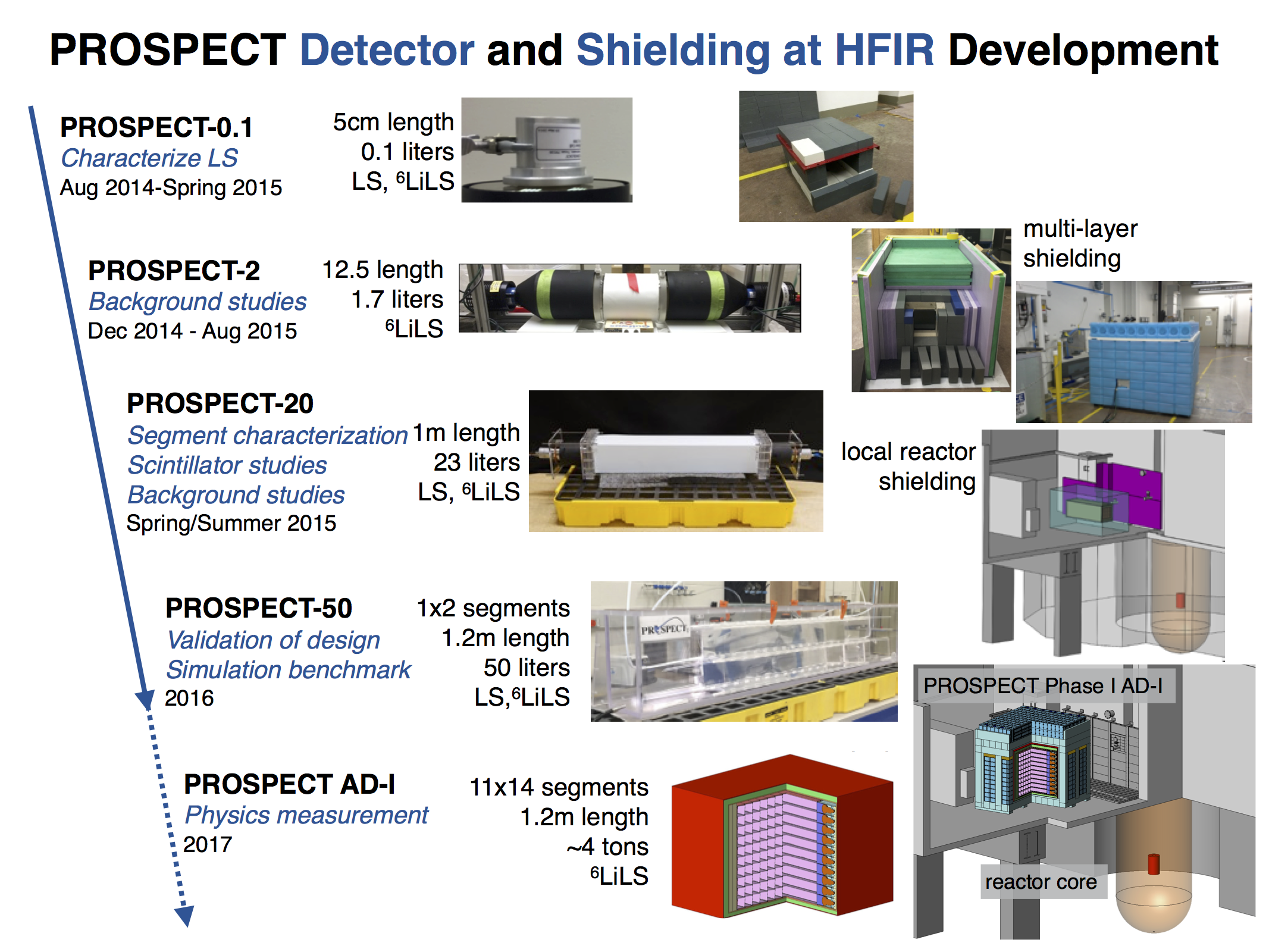 We have developed a set of test detectors and associated Monte Carlo simulations to demonstrate the capabilities that will enable  PROSPECT to met  the criteria described above, including background rejection and detector resolution. The above figure shows the progression of PROSPECT detectors and shielding packages that have allowed us to study specific detector components, informing the design of the PROSPECT Phase I AD-I.